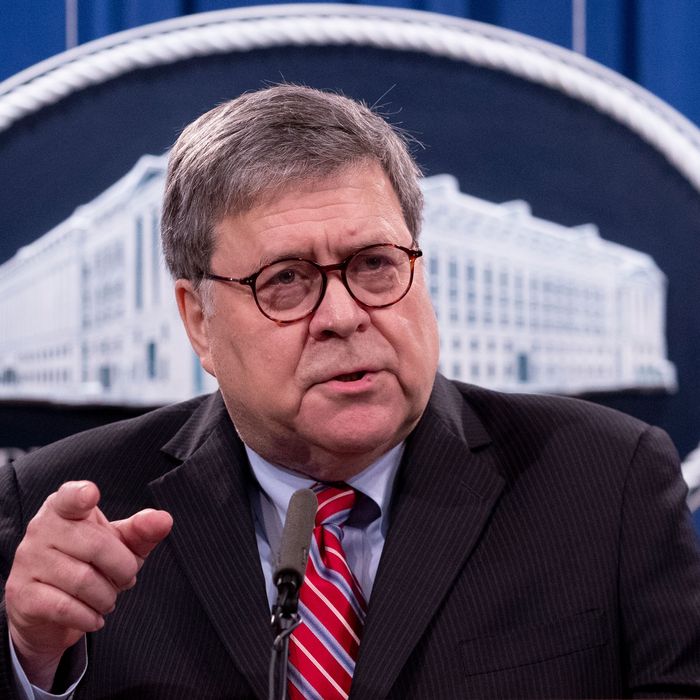 Attorney General William Barr, in what was likely his final press conference before stepping down later this week, made it clear on Monday that he doesn’t support some of the outlandish post-election plans currently backed by President Trump. Barr explained that he still saw no reason to appoint a special prosecutor to investigate alleged voter fraud in the 2020 election, nor one to investigate President-elect Biden’s son Hunter, who is under federal investigation for tax matters. He also said he didn’t believe there was any basis for the federal government to seize voting machines, as crank lawyer Sydney Powell reportedly urged Trump to do in an Oval Office meeting with disgraced ex-national security advisor Michael Flynn.

“I have not seen a reason to appoint a special counsel, and I have no plan to do so before I leave,” Barr said about the ongoing investigation into Hunter Biden, which he said was already “being handled responsibly and professionally” by the Justice Department.

Barr also reiterated his previous comments, made earlier this month, dismissing the need for a special counsel to investigate alleged voter fraud. “If I thought a special counsel at this stage was the right tool and was appropriate, I would name one, but I haven’t and I’m not going to,” he said on Monday. Barr did a fair amount of scaremongering about voter fraud prior to the election but said afterward that the DOJ had found no evidence of systemic voter fraud that could have had an impact on the outcome. In fact, there is virtually no evidence of any voter fraud, anywhere, in the 2020 election.

There is no reason to believe that Barr’s exit-door comments will dissuade or prevent Trump from trying these types of high jinks between now and Inauguration Day, but the comments will nonetheless hang in the air as Barr’s successor, Deputy Attorney General Jeff Rosen, takes over the DOJ.

Barr also contradicted the president’s claim that China, not Russia, might have behind a recent large-scale hack of federal agencies and American companies. “It appears to be the Russians,” said Barr, echoing Secretary of State Mike Pompeo’s recent statement on the matter.

To be clear, as Intelligencer’s Jonathan Chait has repeatedly underlined, Barr’s public skepticism on these issues and his unwillingness to entertain the president’s coup-fancying do not make him some noble guardian of America’s democracy. He’s just a reality-tethered Trump ally who has already gotten in his many unethical licks and now understands it’s time to move on. But regardless, it’s still undoubtedly better that he said something, rather than nothing, on his way out the door.

Daily news about the politics, business, and technology shaping our world.

By submitting your email, you agree to our Terms and Privacy Notice and to receive email correspondence from us.