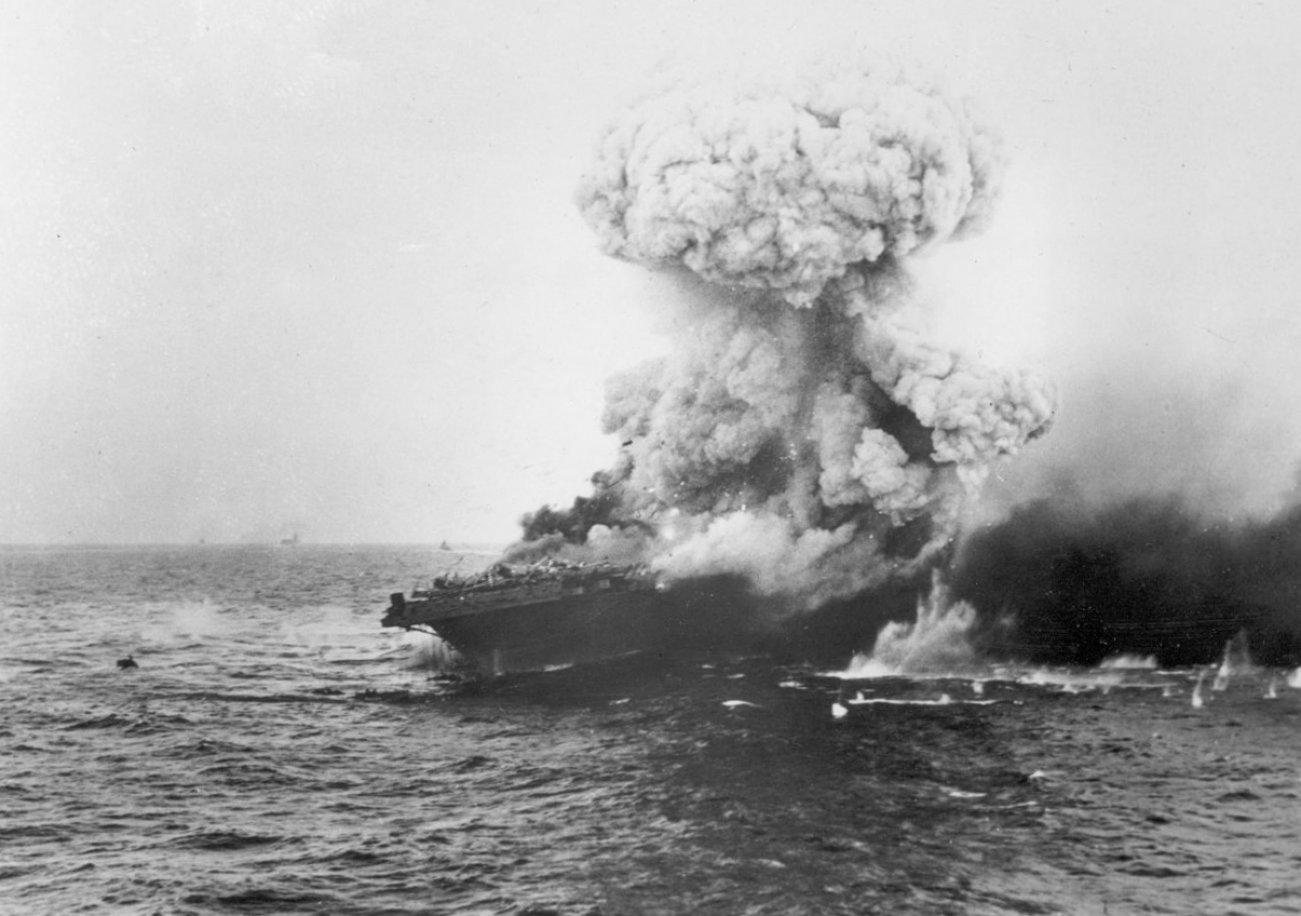 America’s first fleet carrier had fallen fighting precisely the kind of battle it had spent over a decade developing tactics for.

Here’s What You Need To Remember: The seemingly inconclusive battle was a turning point for the Allies. Australia and its foothold in New Guinea remained secure, forcing Japanese forces to commit to a costly and ultimately unsuccessful ground campaign on the latter island. Meanwhile, the damaged Shokaku could not participate in the Battle of Midway, an even larger carrier battle that brought an end to Japan’s advances in the Pacific War.

In the first five months of the Pacific War, the Imperial Japanese military won an almost uninterrupted string of victories, seizing Burma, Indonesia, the Philippines, Singapore, and most of the Solomon Islands and New Guinea. However, Australia remained a thorn in Japan’s southwestern Pacific flank—one which needed to be cut off from U.S. reinforcements before Japanese troops could invade.

Though Adm. Isoroku Yamamoto planned on drawing U.S. carriers into a decisive battle around Midway Island in June 1942, he first authorized Operation Mo in April to isolate Australia by dispatching two separate invasion fleets to seize Tulagi (part of the Solomon Islands) and Port Moresby, a key supply point for Australian troops on New Guinea.

However, American cryptographers had broken the Japanese naval code and learned the details of the plan in a matter of days. Adm. Chester Nimitz decided to dispatch the Navy’s fleet carrier, the Lexington, and the more modern Yorktown to bushwhack the Japanese invasion force.

Japanese marines seized Tulagi on May 3 without opposition, while the second force steamed for Port Moresby. However, on May 4 aircraft from the Yorktown raided the amphibious fleet off of Tulagi, sinking a destroyer and five support vessels. Then the carrier rendezvoused 370 miles south of Guadalcanal with the Lexington and an Australian squadron to form Task Force 17.

Both Japanese and American forces were now aware of the other’s presence in the Coral Sea, northeast of Australia, but did not know each other’s exact location. What followed was the first carrier battle in history—and, indeed, the first naval battle in which the opposing ships never entered each other’s visual range.

The challenges of this new form of warfare began with locating the moving enemy force amidst the vastness of the ocean. The available radars then were short ranged and unreliable, so the seas had to be combed by submarines, flying boats, smaller float planes and carrier-based scouts. The scouts also had to evade defending aircraft long enough to radio the position of the opposing fleet.

For two days, Japanese and American aircraft probed for the rival fleet’s position but only received fragmentary reports for their efforts. In fact, the American fleet had bumbled in between the Japanese invasion force to the south and the carriers assigned to protect them, without either side being aware of how close they were to each other.

Finally, at 8 a.m. on May 8, a Japanese scout detected what it believed to be a carrier and a heavy cruiser.

Once the enemy’s position was verified, a carrier had to quickly launch a strike force before the enemy bombers returned the favor and caught its fuel and bomb-laden aircraft on the flight deck. While approaching, strike planes would have to evade or overwhelm the defending fighters of the Combat Air Patrol (CAP), which were usually quite effective at shooting down slower, bomb-laden attackers.

Then, actually hitting an enemy carrier with unguided torpedoes and bombs posed a major challenge, as the huge vessel performed evasive maneuvers and its dozens of rapid-fire flak guns filled the skies with streams of hot metal and black clouds of shrapnel.

However, sometimes only a few hits were needed. Carriers are stuffed full of aviation fuel, bombs and dozens of warplanes loaded with plenty of both. Just a few lucky hits could ignite massive fires, potentially leading to cascading explosive chain reactions.

At 9 a.m., fifty Japanese warplanes swooped down upon the ships reported by the scout plane—which were in fact the hapless U.S. destroyer Sims and the oiler Neosho. The Sims was broken in two and sunk with all but fourteen hands, while the Neosho was set ablaze.

By then, the American carriers had launched ninety-three aircraft towards a sighting of the Japanese amphibious fleet—also misidentified as a carrier force! However, a ground-based B-17 bomber reported a new sighting at 10 a.m., and the aircraft were redirected.

At 10:40 a.m., the Devastator and Dauntless bombers of the Lexington swooped down upon the Japanese light carrier Shoho, which could carry thirty-five aircraft on its 205-meter-long flight deck. Confronted by a CAP of just two outdated Mitsubishi A5M fighters and a single Zero, the dive bombers managed to land thousand-pound armor-piercing bombs on the deck of the Japanese warships. Meanwhile, the Devastators struck the beleaguered Shoho with five torpedoes in the high water mark of the TBD’s generally unhappy combat career. Aircraft from the Yorktown soon joined in.

At 11:35, less than an hour after the attack commenced, as the Shoho sank below the waves—the first carrier lost by Japan in World War II, prompting SBD pilot Robert Dixon to report back: “Scratch one flat top!” Only 203 of the 834 sailors and aviators aboard the Shoho were rescued.

Five hours later, the Lexington’s radar picked up a counterstrike, including twenty-seven D3A Val and B5N Kate single-engine dive and torpedo bombers, respectively. However, its CAP managed to down eight of the attackers, and the rest aborted mission. A subsequent Japanese night attack proved even less successful.

The following morning, both the Yorktown and Lexington on one side, and the Zuikaku and Shokoku on the other, were ready for round two. Their scouts spotted each other’s fleets almost simultaneously at 8:20 a.m., and exactly fifty-five minutes later both carrier groups launched dozens of warplanes to annihilate the other.

The Yorktown’s strike force found the Japanese fleet by 10:30, and the Lexington’s planes followed an hour later. This time, however, the American aircraft were met by over a dozen Zero fighters, which claimed three Wildcats and two SBDs for two losses. All eleven torpedoes launched by the Lexington’s Devastators failed to hit; American torpedoes were notoriously unreliable at this stage in the war.

The two carrier wing’s dive bombers were only a bit more successful, landing three thousand-pounders on the Shokaku. But those three strikes inflicted more than 220 casualties and crippled its flight deck. At noon its captain, Takatsugu Jojima, decided it was time to tap out and withdrew from the battle.

But meanwhile, the Shokaku’s own attack planes had struck a powerful blow. Though the Lexington detected bogies approaching from seventy miles away, the nine Wildcats in its CAP accidentally overflew the eighteen low-flying B5N torpedo planes. Flak and defending SBDs eventually shot down seven, but the survivors executed a pincer attack on the Lexington and managed to land two hits with their 1,870-pound Type 91 torpedoes, rupturing the huge ship’s aviation-gas storage, jamming both its elevators and breaching the water main, necessitating the shutdown of several boilers.

Minutes later, thirty-three D3A dive bombers swooped in, striking the Yorktown once and the Lexington twice, blowing out a five-inch gun turret on the latter and spraying shrapnel across its funnel. As the American and Japanese strike forces retired to their carriers, they ran into each other and additional aerial duels sent more aircraft plummeting into the sea. Such was the chaos that the Japanese and American air wings each lost eight more aircraft while attempting to land, and numerous warbirds returned so badly damaged they were promptly pitched over the flight deck.

Lady Lex had suffered grievous damage, but still managed to launch additional CAPs and recover all of its aircraft by 2 p.m. However, at noon, the fires started when leaking gas vapors caused a store of aviation gasoline to erupt in a huge explosion, and a chain reaction of additional blasts slowly consumed the ship throughout the afternoon. One explosion blew the elevator a foot above the flight deck, and by 4 p.m. the below decks area became entirely uninhabitable.

An hour later, Capt. Frederick Sherman finally sounded the call to abandon ship. He would not leave his command behind until over 2,700 sailors, marines and aviators evacuated the stricken vessel, leaving behind 216 dead. The destroyer USS Phelps delivered the death blow, launching five torpedoes into the flaming wreck. Finally, the Lady Lex slipped gently under the sea, staying even on its keel even in its final moments.

Both the Japanese and American fleets withdrew after May 8, too battered to continue the fight. The planned Japanese amphibious landing at Port Moresby was canceled.

In purely material terms, the Battle of the Coral Sea was a Japanese victory. Although the Imperial Japanese Navy lost significantly more personnel (966 to 656) and aircraft (ninety-two to sixty-nine), its pilots had sunk a full-sized fleet carrier in exchange for a smaller light carrier.

However, the seemingly inconclusive battle was a turning point for the Allies. Australia and its foothold in New Guinea remained secure, forcing Japanese forces to commit to a costly and ultimately unsuccessful ground campaign on the latter island. Meanwhile, the damaged Shokaku could not participate in the Battle of Midway, an even larger carrier battle that brought an end to Japan’s advances in the Pacific War.

America’s first fleet carrier had fallen fighting precisely the kind of battle it had spent over a decade developing tactics for. Just a year later, a new Essex-class carrier was christened USS Lexington (CV-16), and would remain in U.S. Navy service until 1991.

Sébastien Roblin holds a Master’s Degree in Conflict Resolution from Georgetown University and served as a university instructor for the Peace Corps in China. He has also worked in education, editing, and refugee resettlement in France and the United States. He currently writes on security and military history for War Is Boring. This article first appeared several years ago.